We say things we don’t mean, and do great harm in the process
It’s a common belief that our faiths were sent to Earth to keep us disciplined. God is monitoring us, and can show the records of all our actions to us when the time comes on the judgment day. There’s no escape from God. We must remain good and keep our temptations towards evil away so that we can answer properly and correctly to God.

But does our faith make us better humans? Really? Well, at least our Cabinet Secretary Khandker Anwarul Islam thought it did. That’s why he was heard, according to news reports, saying that our namaz wouldn’t be accepted by God if we keep indulging in haram acts. Bribery is haram, and the briber-seekers’ prayers won’t reach God.

He was, obviously, trying to scare the corrupt officials with his wishful statement. Sweet wish.

He sounded like an innocent soul who thinks officials around him are God-loving, God-abiding, and God-fearing -- whom we call the “pious.” He thought almost all the officials were pious, and they would humble down to the picture he was trying to portray and correct the wrongs they were engaged in.

To my mind, the secretary’s statement implies a deep-seated national problem, an utter helplessness, if you will, a frustrated psyche on the fringe, maybe, a last-ditch attempt to send a message to a superlatively corrupt society that might soften itself only to God.

He is so wrong. Our greed for unearned wealth has surpassed any kind of fear or love for God. We no longer fear him, as our worldliness is more important than attraction or fear of the afterlife. We leave no stone unturned to abuse religion for our own comfort. Religion, for a long time, has just been a veil for us to showcase our Janus-faced psyche. 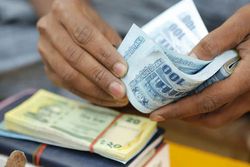