In tennis as in life, time is truly the great equalizer
Growing up, I despised Roger Federer.

It started with his defeat of Pete Sampras, easily my favourite tennis player as a kid, the one who really got me into watching tennis. Seeing this strange young player who seemed to copy my favorite player, only with his ridiculous hairstyle -- it was loathing at first sight.

Then came the ridiculous dominance of the early 00s. If Novak Djokovic seems unbeatable, Roger Federer at that time was beyond belief. Novak at least appears to have tried. He looks like he puts in effort.

Roger would stroll in, smug, poised, oh-so-fancy, hardly break a sweat, destroy his opponent, maybe put on a complete suit for his post-match ceremony because why not, and then it was on to the next one. It was infuriating. 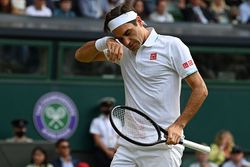 ED: For a safer Dhaka

ED: The time to act is now

OP-ED: Sustainability must start with universities

OP-ED: The tribe continues to thrive

ঢাকা ট্রিবিউন
৭ ঘণ্টা, ৩৮ মিনিট আগে
We use cookies to ensure you get the best experience on our website.