Doing good during The Emergency

Now into my third week of recovering from Covid-19, I am dealing with some side effects. Although I did not need hospitalization, bad dreams have scared me badly. Imagining that I was dying and key memories of my life flashing through my mind; then waking up and finding that I was still very much alive.

Having remembered meeting Prince Philip when he came to my school in London in 1960, my dreams triggered how I met his uncle, Earl Mountbatten in New Delhi in the 1970s. Soon after Mrs Indira Gandhi’s “Emergency,” 1975-77, Earl Mountbatten came to India to “introduce” Prince Charles to India.

At the time, I was one of the Oxfam representatives in India, based in New Delhi. The British High Commission organized a big reception for Prince Charles and Earl Mountbatten and it was hoped that Mrs Gandhi might not come, as the High Commission wanted to avoid any embarrassing moments. She did, however, turn up.

Soon after her arrival, one of the first secretaries of the High Commission came to me and said: “Julian, I want to appeal to you to do something for your Queen and country.” Needless to say, I was startled. The first secretary said: “Julian, Mrs Gandhi is over there on the left side and way over there on the right is the royal party with the Indian Prime Minister, Morarji Desai. We want to avoid any embarrassing situation. Go and engage her in conversation.”

And so, I started talking to Mrs Gandhi about the rural development work supported by Oxfam and the work we had done with the Bangladesh refugees in 1971. The work of 1971 grabbed her attention, and we talked about her brief visit to Oxfam HQ in Oxford in October 1971, and the sadness she felt about Bangabandhu’s assassination in 1975.

ED: Vaccines are for everyone

OP-ED: Getting politics back on track

OP-ED: One state or two states?

Together we heal, learn and shine

Police accused of torturing a minor into murder confession

Amidst a faltering COVAX, time for world leaders to step up

‘What will happen to my child?’ 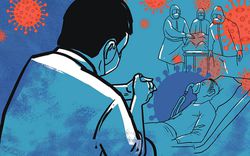 গোলাম শওকত হোসেন
সমকাল
২১ ঘণ্টা, ২৯ মিনিট আগে
We use cookies to ensure you get the best experience on our website.