Two people were killed and three others were injured after a head-on collision between two motorcycles in Jashore's Jhikargachha upazila this afternoon. The deceased were identified as Noyan Hossain (19) and Hossain Ali (20), said police. Sub-inspector Mizanur Rahman, also in-charge of Shewardah Police camp, said the accident took place at Bolla village in the afternoon. They 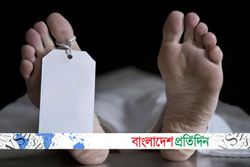 কালের কণ্ঠ
৫ ঘণ্টা, ১০ মিনিট আগে
We use cookies to ensure you get the best experience on our website.