Mark Chapman, the man who killed John Lennon, apologised to Lennon's widow, Yoko Ono, for his actions 40 years prior. Chapman shot Lennon four times in 1980, outside his New York apartment. According to BBC, Chapman has gone on record making the apology to the Parole board at Wende Correctional Facility on New York. The high-profile killer is also reported to have said that he 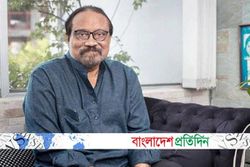 ডেইলি বাংলাদেশ
১ ঘণ্টা, ২৮ মিনিট আগে
We use cookies to ensure you get the best experience on our website.