It was 35 years ago today that Diego Maradona taught England to play, and the date did not go unnoticed in Argentina, where his compatriots remembered his "goal of the century" with a nationwide celebration of cheers and applause. Maradona scored twice against England in a 2-1 win in the quarter-finals of the 1986 World Cup, the second of which was a solo goal often classed as

Djokovic ‘not sure’ about US Open

‘My chest hurts, I am so happy’ 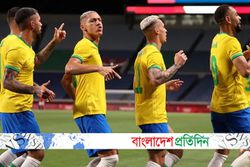 ইনকিলাব
৮ ঘণ্টা, ২১ মিনিট আগে
We use cookies to ensure you get the best experience on our website.