Two grassroots Awami League leaders in Rajshahi demanded the release of Bangla daily Prothom Alo's Senior Reporter Rozina Islam, who was arrested on Monday in a case filed under the Official Secrets Act, 1923. The two AL leaders are Abbas Ali, mayor of Khatakhali municipality of Rajshahi and also the convener of the municipality AL, and Asaduzzaman Asad, former general

Chiranjib Mujib to be released in August 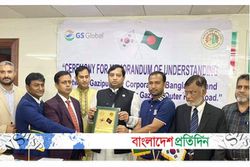 ডেইলি বাংলাদেশ
৫২ মিনিট আগে
We use cookies to ensure you get the best experience on our website.