Thirty-two people have died from Covid-19 during 24 hours (till 8am today), according to a press release issued by the Directorate General of Health Services (DGHS).  With this the total number of deaths reached 12,181 and death rate stands at 1.56 percent. At least 698 new infections were recorded in the meantime taking the total number of people infected to 7,80,857, added

EU contributes to strengthen education system in Bangladesh with Tk 4.23b 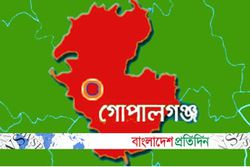 জাগো নিউজ ২৪
৫১ মিনিট আগে
We use cookies to ensure you get the best experience on our website.