Acclaimed both locally and globally, the docudrama titled "Hasina: A Daughter's Tale", will be rescreened on BTV and BTV World at 3:30 pm on her Homecoming Day on May 17. Some private television channels will also screen the visual. On this day in 1981, Sheikh Hasina, now the Prime Minister, at the end of six years of waiting following her father - Bangabandhu's assassination,

MoU to be signed with Turkey on development in sports: Russel 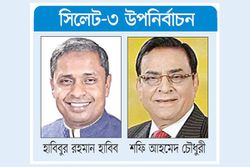 নয়া দিগন্ত
২ ঘণ্টা, ৪০ মিনিট আগে
We use cookies to ensure you get the best experience on our website.