Three people including a four-year-old girl were shot in New York City's Times Square after gunfire broke out in a dispute that they were apparently not involved in, the city's top police official said Saturday. Police Commissioner Dermot Shea said a family from Brooklyn had brought the child to Times Square to buy toys. Shea told reporters gathered at Times Square that she 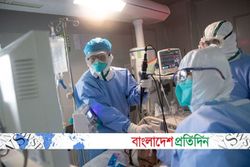 নয়া দিগন্ত
১ ঘণ্টা, ১৪ মিনিট আগে
We use cookies to ensure you get the best experience on our website.