Bangladesh won the toss and elected to bat in the first Test against Sri Lanka at Kandy today. Taskin Ahmed, who last played Tests in 2017 in South Africa, returned to the lineup as the Tigers named three quicks for the first Test, Abu Jayed Rahi and Ebadat Hossain being the other two in the lineup. Mominul felt that the pitch looked a little dry at the toss. 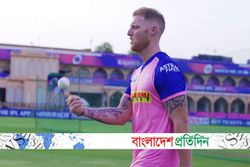 ডেইলি বাংলাদেশ
৩ ঘণ্টা, ১৪ মিনিট আগে
We use cookies to ensure you get the best experience on our website.