In the very first general elections of Pakistan held in December 1970, the Awami League won an absolute majority in the National Assembly. But for the Pakistani military junta as well as the Pakistan People's Party head Zulfiqar Ali Bhutto, the desire to retain control of the central government took precedence over the need to abide by democratic norms.

OP-ED: Mujibnagar Day: A watershed moment in our liberation struggle

OP-ED: Our Covid management and messaging

ED: Lifting the status of our passport 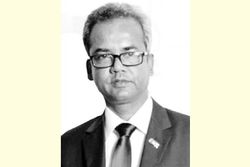 Time to declare a Republic Day in Bangladesh

Education in a post-Covid-19 world

An eyewitness account of the Mujibnagar government’s swearing-in ceremony

বদরুল হাসান
দেশ রূপান্তর
১১ ঘণ্টা, ১৩ মিনিট আগে
We use cookies to ensure you get the best experience on our website.