The European Union's dispute with AstraZeneca intensified Wednesday with the Anglo-Swedish drugmaker denying the EU's assertion that it had pulled out of talks on vaccine supplies. AstraZeneca said in a statement that it still planned to meet with EU officials in Brussels later in the day. The comments came after EU officials said the company had informed the bloc that it 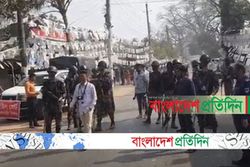 Myanmar's UN ambassador vows to fight after junta fired him

ডেইলি স্টার
৫২ মিনিট আগে
We use cookies to ensure you get the best experience on our website.