Officials in Kushtia are investigating allegations that votes were cast in the Mirpur municipality election using the names of people who had died and those who had been out of the country. On papers, all the 1,415 constituents had voted at their polling centre in Naopara Government Primary School on January 16. Many have pointed out that such unrealistic voter turnout was 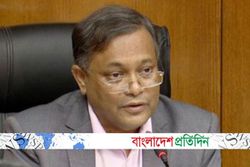 ডেইলি বাংলাদেশ
৩৯ মিনিট আগে
We use cookies to ensure you get the best experience on our website.