Former James Bond actor Sean Connery has passed away, the BBC reported today. He was 90. The Scottish actor, largely regarded as being the best actor to have played 007, was the first to bring the iconic role of the British spy to the big screen and appeared in seven of the spy thrillers, according to the BBC report. In an acting career spanning decades, Connery won many

Let no student fall behind 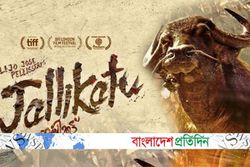 ইত্তেফাক
১১ ঘণ্টা, ৫৫ মিনিট আগে
We use cookies to ensure you get the best experience on our website.