Thomas Mueller is backing Bayern Munich team-mate Robert Lewandowski to break Gerd Mueller's phenomenal record of 40 goals in a Bundesliga season after the Poland striker's red-hot start to the campaign. Lewandowski has scored 10 goals in Bayern's first five league games. "When you see how consistently he scores, it's definitely within the realm of possibility," Thomas Mueller

Tigers keen to prove their standard in T20s 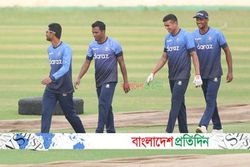 ইনকিলাব
৫ ঘণ্টা, ১১ মিনিট আগে
We use cookies to ensure you get the best experience on our website.