At least five persons, including a freedom fighter died of Covid-19-like symptoms in four districts over the last two days. The 74-year-old freedom fighter died while undergoing treatment in the isolation ward of Manikganj District Hospital in the early hours yesterday. He was admitted to hospital on Tuesday afternoon with fever and breathing problems. Doctors were treating 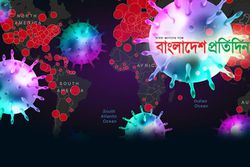 ডেইলি বাংলাদেশ
১৫ মিনিট আগে
We use cookies to ensure you get the best experience on our website.