Marking the day, the ruling party organised a milad and doa mahfil The 40th Homecoming Day of Awami League President and Prime Minister Sheikh Hasina was observed on Sunday.

On this day in 1981, Sheikh Hasina returned home from India after nearly six years in exile following the assassination of Father of the Nation Bangabandhu Sheikh Mujibur Rahman and most of his family members by a cabal of army officers on August 15, 1975.Sheikh Hasina and her sister Sheikh Rehana were spared as they were in Germany at the time, reports UNB.Hasina was elected president of Awami League in her absence in the party's national council held on February 14-16, 1981.

Marking the day, the ruling party organised a milad and doa mahfil at the party president’s political office in Dhaka’s Dhanmondi area after Asr prayers. 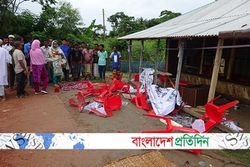 কালের কণ্ঠ
৪ ঘণ্টা, ৫৬ মিনিট আগে
We use cookies to ensure you get the best experience on our website.